A stem cell is a cell with extraordinary ability to develop into specialised cell types in the body. In recent years, stem cells have been widely researched by scientists due to its potential to help and support certain illnesses and health conditions.

How close are we, really, to curing diseases like diabetes, heart disease, cancer, Alzheimer’s and Parkinson’s diseases?

Today, pharmaceutical drugs and medication can only do so much. Treatments merely help delay conditions from worsening but often lack of recovering or cure.

Stem cell therapies use stem cells that do not yet have a particularly assigned function (called “undifferentiated cells”) to repair problems in the body.

Stem cells renew themselves by cell division and once they reproduce, the new cells can either stay a stem cell, or they can be mesenchymal stem cells; cells that can be made to be what the body needs; a red blood cell, a brain cell, etc. This can be particularly useful when the body has worn out or damaged tissues.

There are different sources of stem cells, and some are more effective than others.

It’s coming to light that researches have shown that the answer lies with Stem Cell and is poised to become the next medical revolution and produce potentially lifesaving results.

Stem cell is essentially the building block of the human body.

Stem cells are capable of dividing for a long period of time, are unspecialized, but can develop into specialized cells.

Unlike a regular cell, which can only replicate to create more of its own kind of cell, a stem cell is pluripotent. When it divides, it can make any one of the over 220 different cells in the human body. Ideally, these stem cells will then use their healing potential to repair and regenerate failing or damaged cells.

Stem cells also have the capability to self-renew — they can reproduce themselves many times over.

The recent discovery of Stem Cells not only represents a major breakthrough in medical technology, it also changes the way we view modern medicine.

New and current regenerative medicine can use stem cells to create living and functional tissues to regenerate and repair tissue and organs in the body that are damaged due to age, disease and congenital defects. Stem cells have the power to go to these damaged areas and regenerate new cells and tissues by performing a repair and a renewal process, restoring functionality. Regenerative medicine has the potential to provide a cure to failing or impaired tissues.

Cell Therapy is the only process in the world that has been proven safe and effective in slowing down the aging process and helping you to dramatically regain your health, vitality, and physical power.

Therefore it is not surprising that there have been an increasing number of consumers of placenta live cell therapy. It has been well known as a miracle substance to help people regain youth and become popular among the rich since its discovery.

The basic theory behind cell therapy was stated best by Paracelsus, a 16th-century physician who wrote:

Paracelsus and many other early physicians believed that the best way to treat illness was to use living tissue to rebuild and revitalize ailing or aging tissue.

Doctors who practice cell therapy believe that cell therapy acts like an organ transplant and actually makes the old cells to “act younger”. This biological “lesson” is not quickly forgotten by the cells.

Why is Cell Therapy different from others?

Cell therapy is the only treatment to stimulate the body’s rejuvenation system – cell renewal.

Renewal is a set of built-in mechanisms that our bodies have to keep our body tissues and organs functioning optimally. It repairs damaged cells and replaces them with new ones to maintain a body’s youth and vitality.

God made men simple! Laying the foundations for youth is simpler than you think! The best thing is to go back to basics and look at how our body functions and maintains itself.

Once we understand this, we can then better utilize our body’s own mechanism to rejuvenate itself. Unfortunately, today, healthcare companies complicate things depending on the product lines they are promoting and representing. 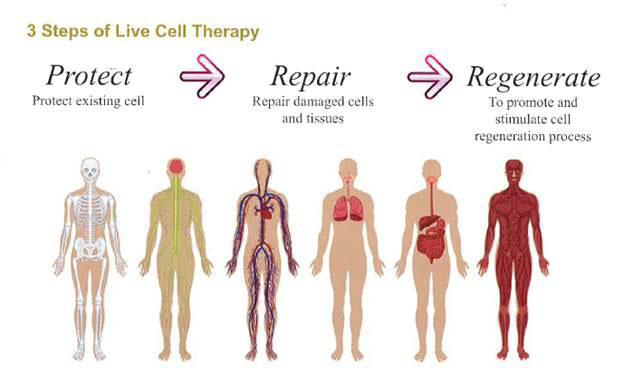 How does Cell therapy works?

Cell therapy can be defined as therapy in which cellular material is injected into a patient.

The implantation by injection or oral live cells has the following advantages over conventional procedure of surgical transplant:

The fact is that the body usually accepts the individual cells injected during cell therapy. This is so because cell therapy uses embryonic cells, whose immunological makeup is still incomplete. The cells then get by the body’s immune system.

Scientific studies, in which these glandular substances were tagged with radioisotopes before injection, have proved that the injected (and ingested) cells do find their way to the specific corresponding organ.

One theory says that the genetic information contained in the RNA and DNA of the “old” cells is defective, because of either age or disease. perhaps the old cells genetic codes have developed gaps or incorrect bits of information. This cellular genetic misinformation causes the cells to reproduce inefficiently. The new cells do not look or function as well as they should.

Along comes the fresh, young cells, with their fresh genetic information contained in their DNA and RNA. This theory says taht the new cells carry the correct genetic message to the old cells. The new cells replace the misinformation with the proper, original genetic codes. The mistakes are corrected and the gaps filled. Once the correct information is in place, the organ or gland begins to function correctly – as if it, too, were as “young” as donor cells.

The second theory is simpler. It explains the aging of the cells in much the same way: As we age, our cells gradually lose their ability to function precisely as they were intended. This theory, however, doesn’t bother with genetic codes. It says that the mere presence of the fresh cells stimulates secretions that activate the aging or diseased cells to get back on the track and function properly.

The implantation provides the recipient organisms with a great number of biochemical substrates and enzymes that are found in very high concentrations and unique composition in the fetal and juvenile cells and tissues.

In 1931, Niehans was consulted by a medical colleague who had accidentally removed a patient’s parathyroid glands during the course of thyroid surgery. As parathyroid glands are vital to life, without it, a person will die. The only option is to have a successful transplant, so Niehans who had a reputation for organ transplant was called in.

On his way to the hospital, Niehans stopped off at the abattoir, where animals he used in his experiments was slaughtered. He obtained fresh parathyroid glands from a steer and proceeded to the hospital, with the intention of transplanting a steer’s parathyroid into the human.

Upon arrival at the hospital, the patient was suffering violent involuntary contraction of the muscles. Realizing the woman would not survive long enough to perform the surgery, But Niehans had an idea, he sliced up the steer’s parathyroid gland and suspended it in saline solution and injected it into the fatally ill woman. Immediately, the convulsion ceased. Her condition improved and recovered to live another 30 years, well into her 90′s.

Many years later, Niehans wrote. “I thought the effect would be short-lived, just like the effect of an hormone injection, and that I should have to repeat the injection. But to my great surprise, the injection of fresh cells not only failed to provoke an immune rejection, but has a lasting effect, longer than any synthetic hormone or surgical graft.”

Cell-based therapy has the potential to treat disease and is also known as regenerative medicine.

Given their unique regenerative abilities, stem cells offer new potentials for treating diseases and symptoms such as hair loss, baldness, diabetes, cancer, heart disease and many others.

In other words benefits of Live Cell Therapy is: